Recapturing Democracy: Neoliberalization and the Struggle for Alternative Urban Futures

In January of 2003, the novelist Arundhati Roy spoke at the World Social Forum in Porto Alegre, Brazil. "Remember this," she said, "we be many and they be few. They need us more than we need them. Another world is not only possible, she is on her way. On a quiet day, I can hear her breathing."

This book is an insistent claim that Arundhati Roy is right. In the current literature on urban politics, there is much doom and gloom because of the pervasive dominance of neoliberalism, under which the state aids corporations and pursues economic development at all costs. In the book I argue we can overcome the dominance of neoliberalism by working to democratize cities. But democracy has many meanings, and so the book examines the various ways democracy is understood. Drawing primarily on Ernesto Laclau and Chantal Mouffe, I advocate a vision of democracy in which many different social movements, all of whom are disadvantaged in some way by the dominance of neoliberalism, join together in broad networks to pursue the radical democratization of urban politics. I contend that there is much potential in the idea of "the right to the city" as an organizing principle that can bring movements together. The right to the city claims that urban space should first and foremost meet the needs of its inhabitants, not the needs of its owners. The book develops these ideas in dialogue with four concrete cases, three from Seattle (South Lake Union, Waterfront Redevelopment, and the Duwamish River Cleanup) and one from Los Angeles (homeowners' movements in the San Fernando Valley.

Please feel free to contact me with any questions! 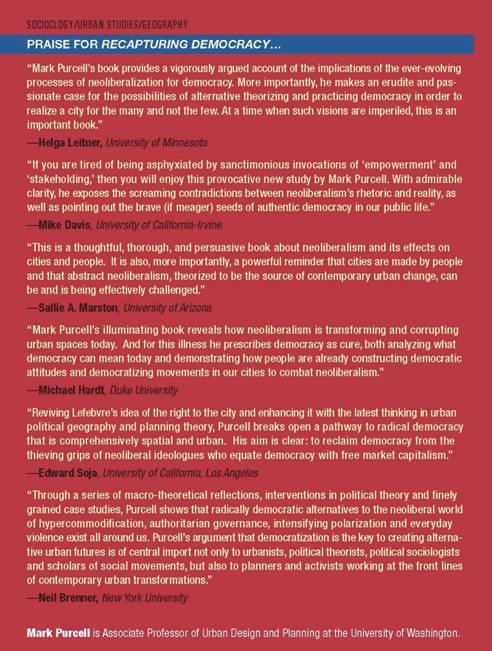